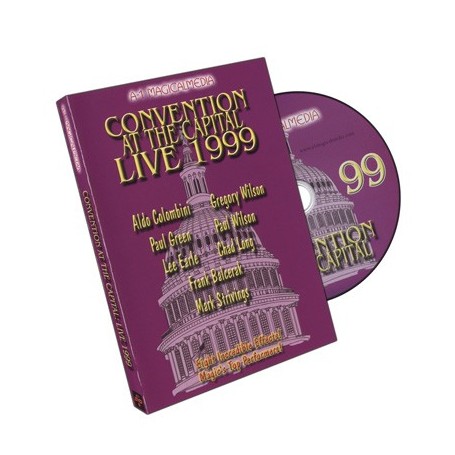 Convention At The Capital 1999 by A-1 Magical Media - DVD

Performers and EffectsHighlights from the lectures of today's hottest performers! Year in and year out, the A-1 MagicalMedia Convention at the Capital is hailed as the greatest convention ever. The reason for that is the performers. With this incredi
€34.95

Highlights from the lectures of today's hottest performers! Year in and year out, the A-1 MagicalMedia Convention at the Capital is hailed as the greatest convention ever. The reason for that is the performers. With this incredible videotape you don't have to miss a thing. These highlights of the 1999 A-1 Convention feature eight of the top magicians in the world sharing their pet secrets with you. Material suitable for close-up and stand-up, each effect is performed before a live audience and then meticulously explained. Not only that, but you will watch and learn secrets never before chronicled on videotape.

Aldo Colombini - No- Palm Repeat Card To Pocket - Imagine, the spectator's selection magically travels to your pocket - TWICE - with no palming required!

Paul Green - Tradeshow Transposition - A working pro teaches you his most sought- after tradeshowstopper!

Lee Earle - Life Force Triangle - An amazing effect that gets them to take your business card home!

Chad Long - Ninja Coin & Ninja Key - Two extremely magical effects that make it appear you have the dexterity of a Ninja magic Master! Flip a coin high in the air and appear to catch it deftly between your thumb and forefinger! Or toss your keys in the air and catch the right key at your fingertips every time. It looks impossible, but it's easy to do!

Frank Balcerak - The Color-Changing Pen - A beautifully thought- out method for magically changing the color of your trusty sharpie!