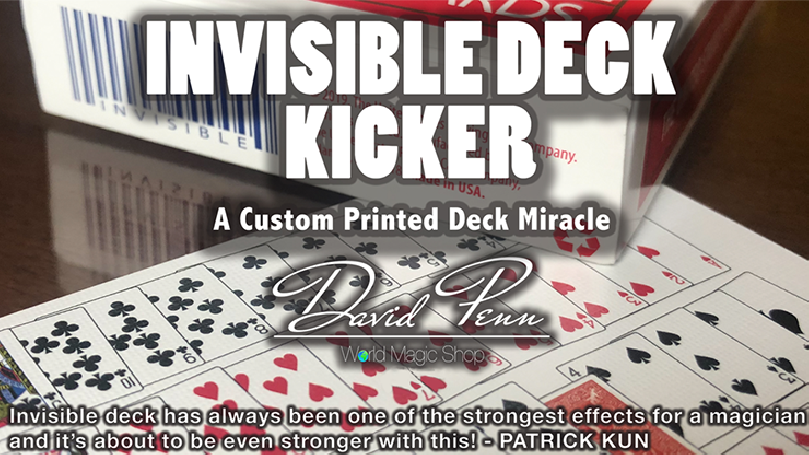 Use this custom printed deck as an INCREDIBLE follow up to 'Invisible Deck' or as a stand-alone routine.The '52 on 1 Card' has always been a great gag, but David Penn has turned this gag into a fully routined miracle! A miracle that happens in your s
€32.65

Use this custom printed deck as an INCREDIBLE follow up to 'Invisible Deck' or as a stand-alone routine.

The '52 on 1 Card' has always been a great gag, but David Penn has turned this gag into a fully routined miracle! A miracle that happens in your spectator's hands.

Under test conditions, one card is placed on your spectator's hand. They are asked to name ANY card. You explain that if the freely named card is on the other side of the card in their hand, then they need to get you a drink. They take that bet!

When they tum over the card and discover the '52 on 1 Card,' it's a great gag. The '52 on 1 Card' is then placed either face up or face down on the spectator's hand.

Under impossible conditions, the card they freely name turns over, not in the deck, but IN THE PICTURE on the card that they have been holding the entire time!

You will never get offered so many free drinks!

Brand new from the creator of Coinvexed, Mystery Solved, Topit 180 and The Gimmicked 52-1 Deck, this is INVISIBLE DECK KICKER by David Penn.

"Invisible deck has always been one of the strongest effects for a magician and it's about to be even stronger with this!"
- PATRICK KUN

Coming out next week for Blackpool is a fantastic call back piece if you perform ID, but it will also work as a standalone effect. I saw this a few weeks ago and David blew me away with it!"
- MARK BENDELL

"Sometimes a magic trick comes along in which you say, 'That makes so much sense! Yes. Yes. Yes. I need this!' That just happened to me. David Penn made that happen today. His new effect has taken an old standby gag and he has turned it into a strong piece of magic that will make your audiences smile, think and say, 'NO WAY!' This is great fun and I'll be adding this into my pocket immediately."
- JONATHAN LEVIT

"This is the first product I will be picking up at Blackpool 2020!"
- JAMES SAMUEL - BGT LIVE FINALIST