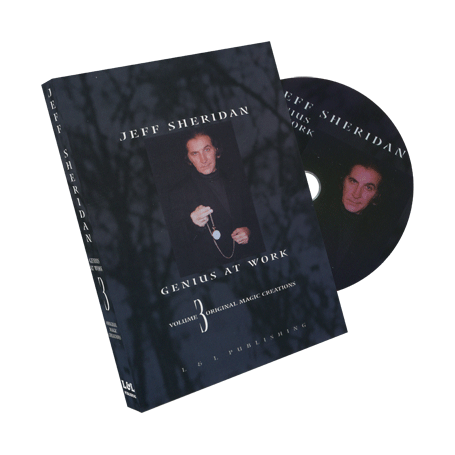 Jeff Sheridan is one of magic's most original thinkers and on this video, he shares some of his favorite and most closely guarded effects.Lost And Found Bill - A borrowed bill's serial number matches the performer's prediction - which just happens to
29,95 €

Jeff Sheridan is one of magic's most original thinkers and on this video, he shares some of his favorite and most closely guarded effects.

Lost And Found Bill - A borrowed bill's serial number matches the performer's prediction - which just happens to be gold-embossed on his wallet.

Triple Headline Prediction - Combine the classic effects of Mental Epic and Clipline and you have an amazing effect that will confound even those who are in the know!

Jumping And Linking Pocket Watch - A pocket watch visibly leaps from the performer's pocket and attaches itself to its chain. This is visual magic that defies explanation!

Cut And Restored String - Two pieces of string are cut in the fairest possible manner yet are restored by the performer.

Dime And Penny - Every magician started with this trick but Jeff Sheridan shows you how to make it into a miracle. A coin visibly turns into another and then penetrates a solid sheet of rubber to fall into a glass.

Sheridan Princess - Three pairs of cards are placed under wooden plaques. The performer removes one card from under each plaque, correctly predicting the spectator's choice in each case. A triple miracle!

Card Stab - Another classic of magic given the Sheridan treatment. A selected card is shuffled into the pack, which is then wrapped in a napkin. The performer thrusts a knife through the napkin, impaling the
selected card.

Cold Capsule - Imagine the look on your spectators' faces as a common cold capsule pill dances and animates above your outstretched hand with no apparent means of locomotion. Then, a borrowed ring literally hovers in the air, again with no visible means of support.

Clone Cards - Wild Card outdone! Several cards turn into a duplicate of a selected card. For the incredible finale, the entire deck is spread to show that every card now matches the selection!

Secret Slate - The performer is able to flawlessly pick out the business card the spectator has initialed or has drawn a picture on, no matter how much the face-down cards are mixed.