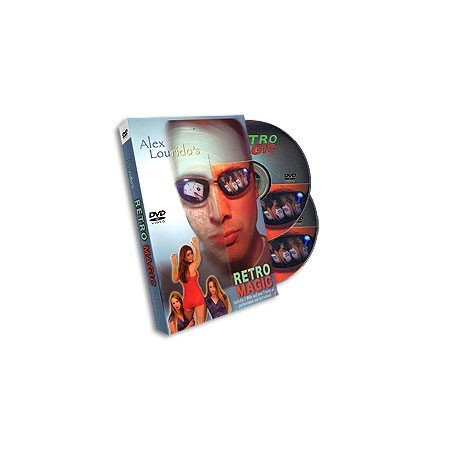 From the creator of the popular Osmosis Bottle and Butter Coin, Alex Lourido bring you his newest masterpiece -- Retro Magic! This two hour, two volume DVD set consists of Lourido's well balanced diet of magic that is so incredibly unique, he has been deemed "One of the greatest modern magicians in America" by Tim Qualle Show -- Comcast. With its four camera angle perspective and its network quality video and graphics, Retro Magic has established a new professional standard for instructional videos. From the mind-boggling magic to the incredibly beautiful women, you will swear you are watching a high-energy magic special on the major networks!

Over 30 minutes of live performance before a group of sizzling hot women!

Well over an hour of instruction, where Alex methodically breaks down every trick using multiple camera angles and leaving nothing to the imagination.

An additional 30 minutes of "quick tricks" , where Alex performs and reaches his personal handling of some of the best pocket tricks on the market!

A slide show that breaks down the assembly of one of magic's most useful props, which will greatly enhance your routines!

A bonus trick that is an absolute reputation maker!