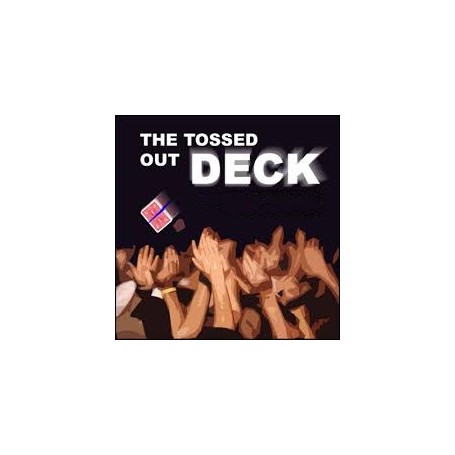 The performer removes a deck of cards from a card case and fans the cards showing a mixed deck. He then removes the two jokers and puts a rubber band around the middle of the deck. The performer lifts a portion the deck to illustrate how audience members are to peek at cards while the rubber band is around the deck.The deck is then tossed to FIVE different people, without any secret switches. Five people peek at a card anywhere in the deck. After peeking at a card, the person remains standing.Important Note: One worry with the old tossed out deck is that if a participant accidentally let an extra card or two slip off his thumb, the method would be exposed. This version eliminates that. If a person lets a few cards riffle off his thumb either accidentally or purposely, the method will not be exposed!The performer asks the five people to think of their cards. He then invites the audience to think of random cards to attempt to confuse him. The performer claims he will READ only the thoughts of the five people standing, despite being bombarded with thoughts from the audience.The performer says that he thinks that TWO of the standing volunteers have somehow peeked at the same card, an amazing coincidence