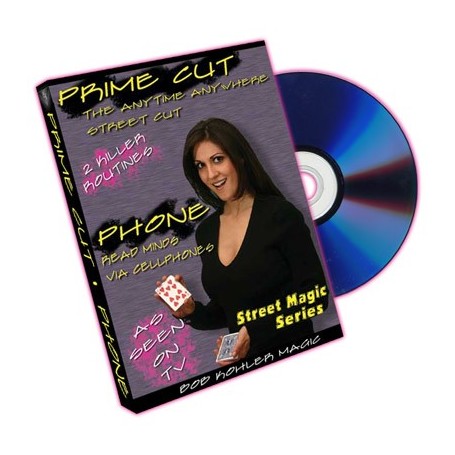 This DVD is the first of our "Street Magic Series". It contains two blockbusters that are truly amazing, yet easy to do.

Here's the effect. Ask anybody to just name any one of the 52 cards. Their choice is totally free they can name any card. Imagine, the victim cutting the deck EXACTLY at the card they just named! It's AWESOME.

The effect is a classic. It was perhaps the best effect in Juan Tamariz' book Mnemonica. Many performers attempted to learn this method but found it takes months of work to master. Even when mastered, during many performances you were forced to use "outs" to bring the effect to a successful conclusion. Those who took the time to master the effect however found that the reaction from their audiences made the effort worth it.

Prime Cut uses an amazing method that is so easy that anybody can do it with 100% accuracy in just a couple of hours. It works every time and your audience's reactions are always through the roof. Why...because there are no "outs" as in all of the previous methods for this killer effect. Once you're forced to use an "out" the effect and therefore the audience reaction is lessened.

Prime Cut will put the power of the best card trick "on the street" in your hands the day you get this amazing DVD.

Simply the best trick over the phone...EVER! Here's why. The effect is direct.
The effect is a real skull cracker that goes right to the center of their brain!

Phone is a diabolical solution created by Eddie Fields. It's hard to believe an effect this deadly could be absolutely dead easy to do. But it is, in fact it's self-working!