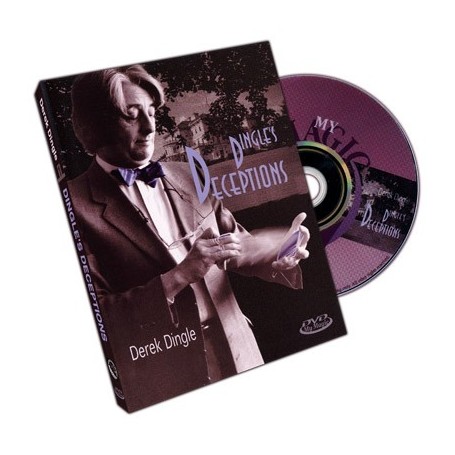 "We have with us the greatest card manipulator in the world."- Barbara WaltersDerek Dingle's first book, Dingle's Deceptions (written by Harry Lorayne), which was released in 1971 created a firestorm of interest. The routines taught in that book crea
34,95 €

"We have with us the greatest card manipulator in the world."
- Barbara Walters

Derek Dingle's first book, Dingle's Deceptions (written by Harry Lorayne), which was released in 1971 created a firestorm of interest. The routines taught in that book created his reputation as one of the best, most skilled and creative close-up magicians in the world. On this DVD you will see Derek Dingle perform and teach the miracles that first made him famous. As a bonus, Dingle teaches the hysterical routine which he uses in his stand-up and formal close-up shows.

Card In Balloon: A funny stand-up routine where a selected and signed card appears in a chosen balloon.

The International Coin Trick: Four coins, each from a different country, penetrate the center of a table, one at a time arriving audibly in a glass.

Through & Through: Four cards are placed at the four corners of a table. They magically gather beneath a jumbo card one at a time.

Color Triumphant: A card is peeked at in a red deck. The deck is cut into three piles and the piles are shuffled face up and face down. When the deck is spread all the cards are now facing the same way. As a kicker ending the deck is now blue backed and the selection is the only red backed card in the deck.

Four Coins In The Countin': The coin assembly that introduced the now famous Pickup Move. Four coins in different corners of the table vanish one at a time and gather under one playing card. As a finale a large coin is produced.

Open Sesame: Four Aces are lost in different parts of the deck and are then found using four different flourishy methods.

Double Color-Changing Aces: Four aces are lost in a red deck and then produced, but now they have blue backs. In a visual ending their backs change back to red in a flash.