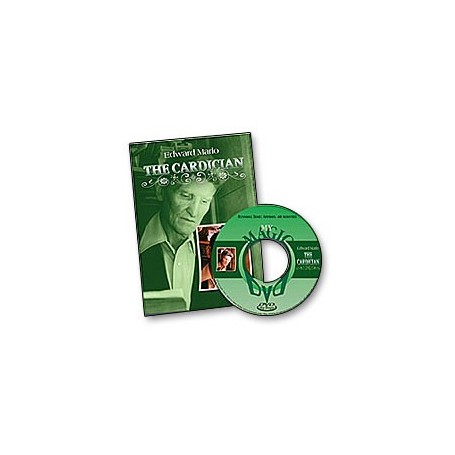 The Cardician This DVD begins with a short documentary hosted by Dan Korem about Edward Marlo and the famed Schulien's where Marlo used to hold court. The documentary features Charlie Schulien, David Solomon, Danny Korem, and Jack Pyle. This program
34,95 €

This DVD begins with a short documentary hosted by Dan Korem about Edward Marlo and the famed Schulien's where Marlo used to hold court. The documentary features Charlie Schulien, David Solomon, Danny Korem, and Jack Pyle. This program was originally released in 1982 and was the first video footage of Marlo to be made available. It was shot using broadcast quality equipment and is still considered the finest quality footage of the master in action. This DVD offers a rare glimpse at one of the most important figures in 20th century card magic, captured while still in his prime.

Routines and techniques performed and explained:

Crossed Cases: Two decks of cards are impossibly removed from a criss-crossed box that can only hold one deck. Direct Transposition: The top cards of two packets of cards change places. Large Face Small Back: A method of showing a card to have a full sized face and a miniature sized back. Snap Change: One card visually changes into another. Aces To The Top: A three-phase routine where the four aces keep rising to the top of the deck after continuously being lost in the middle. The final phase is a triumph effect where the aces are the only ones face down and are in every fourth position for a poker deal. D'Amico One-Hand Second Deal: A method of dealing the second card from the top with one hand. Cigar Bottom Deal: A technique for doing bottom deals without turning your wrist. Table Edge Pass: A method for nullifying a cut while sitting at a table. Tap End Pass: An in the hands method of nullifying a cut. Dribble Pass: A method of nullifying a cut while dribbling the cards between the hands. Combination Pass: A method for doing the classic pass slowly. Turn Down Palm: A method of palming the top card of the deck as it is being turned face down. Future Classic Palm: A method for palming the top card as the deck is turned over or tabled. The Punch Deal: A method of dealing a winning poker hand from a freely shuffled and cut deck. No Touch Theory Second Deal: Details on how to do Marlo's technique for the second deal.

One hour of magic and techniques performed and explained by Edward Marlo. Hosted by Dan Korem. Also includes interview segments about his friends and his magic