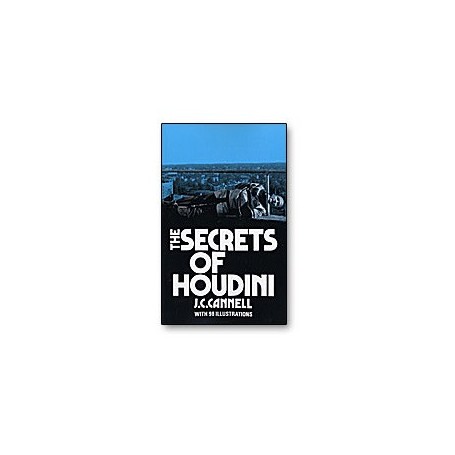 The Secrets of Houdini by J.C. Connell - Book

World-famous illusionist, master deluder, showman; Harry Houdini (alias of Ehrich Weiss) is one of the most legendary figures of the modern stage, and probably the most controversial and misunderstood magician of all times. So fantastic were his tric
12,95 €

World-famous illusionist, master deluder, showman; Harry Houdini (alias of Ehrich Weiss) is one of the most legendary figures of the modern stage, and probably the most controversial and misunderstood magician of all times. So fantastic were his tricks that many thought him to be supernatural, a mystic and an amazing spiritualist.

Exposing his closely kept professional secrets, and revealing in general terms the whole art of stage magic, this book is now considered a classic study of Houdini's strange deceptions.

J.C. Cannell, professional magician, friend and colleague of Houdini in The Magician's Club, was the first to explain rationally how Houdini achieved his tricks. These include the famous challenges to death, escapes from bank vaults and from a Russian prison vanlined with zinc, walking through brick walls, escapes from crates under waters, disappearing ladies, women floating in mid-air, vanishing elephants, ghostly manifestations, seances, card tricks, rope tricks, mind reading, spirit messages and miracles. All of these and much more discussed in clear, simple language and for better understanding, the author has included numerous line drawing of Houdini's ingenious escape devices, with diagrams of the more complicated tricks. Twenty-four new photographs have been added to the twenty-three in the original edition, illustrating scenes from the magician's life as well as his performances.

When this book was originally published shortly after Houdini's death in 1926, it caused such a controversy that many people simply refused to believe the author. Yet, if you are interested in magic, the stage or the fabulous life of Harry Houdini, you are certain to find this book a fascinating experience. Perhaps the only way to really understand Houdin is is to tread this book and judge for yourself. Don't be surprised if the author keeps you glued to each page as you follow step-by-step some of the most incredible stunts of the century!