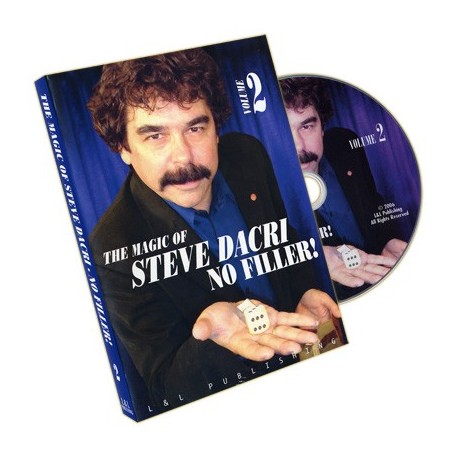 VOLUME 2â€¢ EXPLODING BUNNIESA single sponge rabbit placed into a spectator's hand literally explodes into a bevy of bunnies when the spectator drops it onto a table.â€¢ BREAKFAST TRICKA real-world version of the card to impossible place plot as a playin
29,95 €

â€¢ EXPLODING BUNNIES
A single sponge rabbit placed into a spectator's hand literally explodes into a bevy of bunnies when the spectator drops it onto a table.
â€¢ BREAKFAST TRICK
A real-world version of the card to impossible place plot as a playing card, selected under extremely fair conditions, vanishes, only to be found in a sealed box of cereal.
â€¢ INDIAN CUPS & BALLS
A beautiful version of a traditional, but rarely seen, classic magic effect. Small balls vanish and reappear under brass bells in a variety of amusing ways, leading up to an amazing finish.
â€¢ DICE ROUTINE
A chink-a-chink style dice assembly with a difference. Four dice magically travel between the performer's hands with the last die - the Houdini die - escaping from a small metal box before joining the others.
â€¢ SIX CARD REPEAT
Another Dacri-ized version of a magic classic that will keep your audience in stitches. The performer tells the story of one of his first experiences with a magic trick that uses six cards and no matter how many he throws away (or inadvertently drops), he always has six!
â€¢ CARD TO MOUTH
The performer demonstrates his ability to seemingly have spectators select any card he wishes. For the big finish, a signed selection is produced from a very unlikely place!
â€¢ TAKE A CARD
The performer has four spectators each select a card. Three are found to be Queens but the fourth is a Jack. Turning failure into a magical success, the Jack is changed into the fourth Queen. A great demonstration of the Classic Force for real-world audiences.
â€¢ CARD STAB
A card is selected and mistakenly torn by the spectator. One piece of the card is retained by the spectator and the others are discarded in an oatmeal tin. Another card is selected and returned to the deck which is also placed into the tin. The performer introduces a dagger and, after causing the cards to magically jump out of the tin, manages to impale two cards on its blade. One is the second spectator's selection and unbelievably, the other is found to be the first card chosen, magically restored . . . and yes, the spectator's piece fits!
â€¢ CLASSIC FORCE DEMO
Steve Dacri's version of the Classic Force has been hailed as one of the best in the business and in this extensive segment, Steve goes into great detail about his handling of this indispensable tool. Every nuance, including the timing, psychology, choreography and the necessary attitude, is discussed and demonstrated. Learn to do this as well as Steve and you'll be performing reputation-making card magic.
â€¢ BONUS SECTION
Entertaining segments from several of Steve Dacri's many television appearances. Watch as Steve performs on "The Dinah Shore Show" and "The Merv Griffin Show."