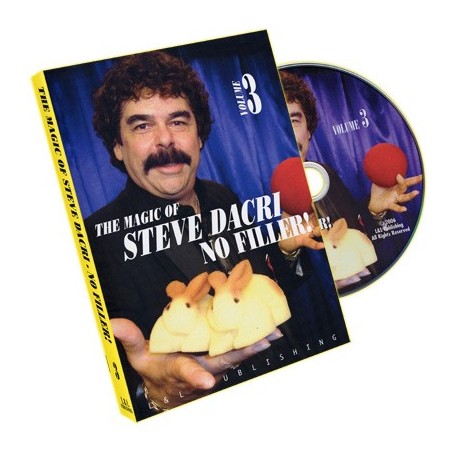 VOLUME 3â€¢ SUCKER EGG & HANKYA brand-new take on the classic Silk to Egg with comedy, audience participation and a surprising and magical ending. A spectator is brought up to learn how a magic trick is done and ends up seeing some apparently real
29,95 €

â€¢ SUCKER EGG & HANKY
A brand-new take on the classic Silk to Egg with comedy, audience participation and a surprising and magical ending. A spectator is brought up to learn how a magic trick is done and ends up seeing some apparently real magic! And, if you think you know this one already, prepare to be fooled badly!
â€¢ BUNNIES OVER HEAD
In this version of Slydini's legendary trick, large sponge bunnies (and even a huge sponge ball) are made to vanish right before a seated spectator's eyes, much to their amazement and to the amusement of everyone else in the audience who sees exactly where the objects are going!
â€¢ BOWL ROUTINE
Combine Roy Benson's timeless routine with some additional Dacri touches and the result is a routine you'll always use. Sponge balls travel invisibly from the performer's hand to underneath an inverted bowl followed by a magical surprise!
â€¢ COINS THROUGH TABLE
Steve learned this from Slydini, streamlined it with some help from Dai Vernon, and now passes along the real work on this classic of coin magic.
â€¢ COINS ACROSS
Four half-dollars travel invisibly from one of the performer's hands to the other. Steve's version of the Winged Silver plot can be done completely surrounded, perfect for strolling situations.
â€¢ TORN & RESTORED MAGAZINE
The center pages of a magazine are removed, a corner is torn off for verification and the rest of it is torn into small pieces. The performer then restores the pieces and yes, the removed piece fits! Frank Garcia used this to build crowds at a trade show and now it can be yours!
â€¢ CHOP CUP
Steve takes you through every step of his one cup and ball routine, complete with two final loads!
â€¢ CARD IN PANTS
A signed card magically travels to an impossible, improbable - and deeply personal - place!
â€¢ BONUS SECTION
An episode of "Steve Dacri's Magic Notebook," a TV show that Steve produced and starred in. Besides Steve's stage and close-up segments, it also features performances by Dai Vernon (used with permission from the Dai Vernon estate) and Joe Cossari, The King of Cards. You'll also see the complete infomercial that Steve produced for his "Magic Secrets" video magic kit that aired nationally.