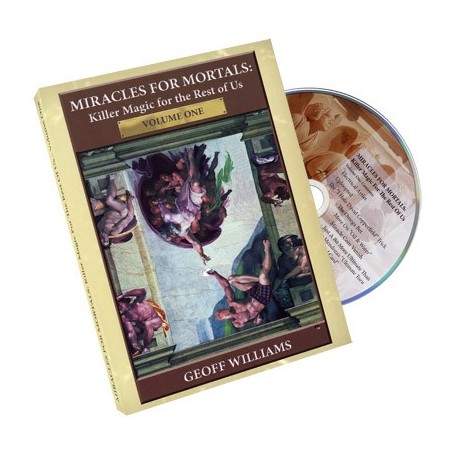 Miracles For Mortals Volume One by Geoff Williams - DVD

ELECTRICAL ARTLET - Boom box cord too short to reach the wall outlet? No problem; just draw an outlet on a pad of paper, plug in the cord and the music starts right up! Based on a Fantasio effect and used with his permission.

THE "I HATE DAVID COPPERFIELD" TRICK - Based on "Close-Up Illusion" by Larry Jennings, a card VISIBLY MELTS through another. The visuals here go WAY BEYOND the original.

THE OMEGA BET - Based on the Karl Fulves effect, Bob Wagner has turned this into a KILLER piece of entertainment, a 5-phase whirlwind of fun for everyone in the room! A random spectator decides the final, and most impossible, bet of all. The routine uses my false overhand shuffle (which is quite easy but appears totally fair).

MORE ON "OIL & WATER" - Sam Schwartz's wondrous 3-phase, 8-card O & W routine with NO SLEIGHTS! NONE! Thanks to Sam for allowing me to include this gem with minor handling changes.

MIRACLE COIN VANISH - This gets GASPS from spectators. Looks like real magic. (Note: a jacket or sportcoat is required)

JUST A BIT MORE ULTIMATE THAN JOHN MENDOZA'S "ULTIMATE TORN & RESTORED CARD" - The name says it all. In an e-mail to me, Mr. Mendoza (a close-up DEITY) said he thinks more of this method (of his trick which appeared in "The Book of John") than any of the "piece-by-piece" restorations out there. You're clean at the first and clean at the end. As a bonus, it's SUPER EASY to do even though the card is SIGNED ON BOTH SIDES!

INVISIBLE DECK FINESSE - Makes using an Invisible Deck more fun than ever (and the reset is DURING the routine).

FORKLIFT - Move silverware with your mind!

4-WAY COINCIDENCE - A reworking of a stunning prediction routine by John Murray from "Card Cavalcade 3" by Jerry Mentzer (included with Jerry's permission). Use a borrowed, thoroughly-shuffled deck. There's only one real "move" (which is laughably simple).