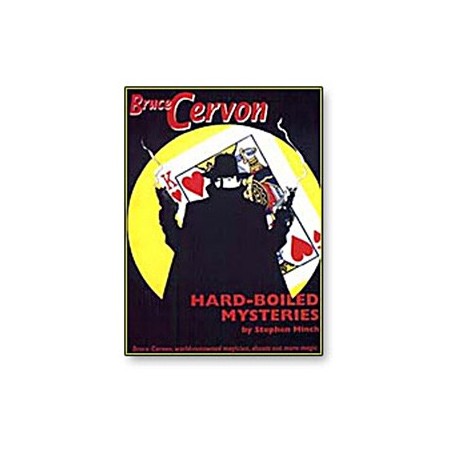 52 prized effects! Including - The Twenty-Five Dollar Aces Trick, Aces out-jogged in the deck transpose separately, with indifferent cards, the last one visibly!; Impact Aces, used in Cervon's Magic Castle close-up show for years!; Bruce's own Sub-Mariner Cards, four face-up cards penetrate a wallet one at a time ... kept secret for over a quarter of a century, now finally released, it contains subtleties that bring it into the mind-blowing realm! Other items are Bruce's beautiful treatments of such classics as Ring Again! - the ring-off-the-rope routine; Matrix; Vernon - Cervon Run-Up Demonstration; Quadruple Coincidence; Triple Change; The Mac Switch and an enormous vault of other loot. All designed to make an unforgettable impression on the toughest of the tough guys. Hard-Boiled Mysteries is a winner! This book gives you the low-down in great detail, including the telling tips and touches that show how to "kill" your audience with these Hard-Boiled Mysteries Hardcover, 8 1/2 x 11 in handsome full color dust jacket, 192 pages, hundreds of clear photos of Bruce's hands. The name Bruce Cervon guarantees first class original effects.