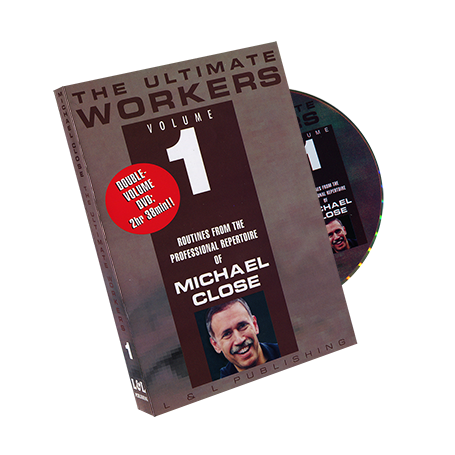 Contains :The Invisible Deck - You know the effect of this classic trick: A freely named card is the only face-down card in a face-up deck. But when you watch the performance, you're going to get fooled. Using routines by Bruce Cervon, Allan Ackerman
29,95 €

Contains :
The Invisible Deck - You know the effect of this classic trick: A freely named card is the only face-down card in a face-up deck. But when you watch the performance, you're going to get fooled. Using routines by Bruce Cervon, Allan Ackerman, and Steve Beam as a starting point, Michael has produced a streamlined handling which uses an ordinary deck of cards. Magicians around the world have speculated about this trick. Now you'll learn all the work.
The Smiling Mule - A classic by Roy Walton. Michael has eliminated the one bad "moment" in the trick, and the results are staggering. Suitable for close-up or stand-up, this routine has been a mainstay in the repertoires of many top card men.
The Ooh-Ah Bird - Give your fingers a rest. Here's the perfect trick if you have to perform for children in a restaurant. The routine is simple, colorful, funny, mysterious, and the child takes an origami figure home as a souvenir. Plus, you'll learn some new work on the venerable Cross-the-Cut Force. If you're new to card magic, this is the perfect trick for you.
The Pothole Trick - This is the big one! One of the most talked about tricks in magic, and one of the most baffling. There are lots of "moving hole" tricks out there, but none have the impact and the memorability of The Pothole Trick. If you could really move holes, this is how it would look. Plus, the spectators take home your business card in an impossible condition. Even if magic isn't your profession, if you hand out business cards, The Pothole Trick will make you money. This is one of Michael's most prized routines, and this is the first time the method has been explained on video. In addition, Michael reveals some secrets which have never been released before. This trick is worth the price of the video.
Dr. Strangetrick - This handling for Card Warp may well be the most amazing and convincing yet created. Designed to fool the most astute spectator, this is Michael's favorite opening routine. For the first time, all the work is revealed; nothing has been held back.
The Judah Shoelace Routine - A great penetration effect resurrected. Stewart Judah's wonderful trick fell out of favor because it required a paper straw. Michael's solution is simple, and makes it easy to carry the props in your pockets.
A Trick for O'Brien - George Orwell would have loved this. Utilizing the concept of "who controls the present controls the past; who controls the past controls the future," a prediction effect is raised to miracle status. The principle involved can be applied to many other effects.
The Imagination Tester - A weird origami effect in which a paperfold of a belt buckle becomes real.
Tut Tut - Four widely-spaced Aces come together and trap a selected card. This sneaky effect allows you to shuffle a deck many times and still be ready for memorized deck mysteries.
Myopia - This is very close to real mindreading. Two spectators think of cards. The magician asks one question and can immediately name the cards.
The Birthday Book - A spectator selects a playing card. A date book is shown; next to each date is a playing card. The card written next to the spectator's birthday is shown. He has selected the exact same card. Michael Close has used this method to fry magicians and laymen around the world.