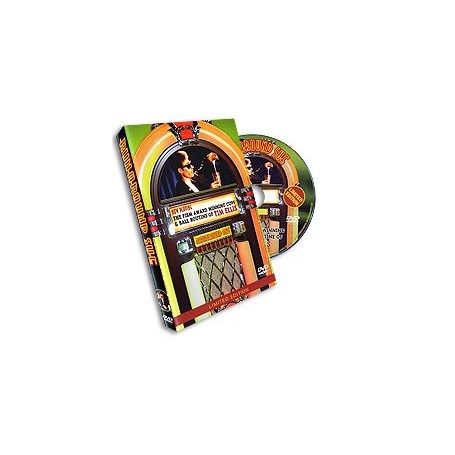 A 1 hour DVD containing the full explanation of Tim's entire FISM award winning routine. Tim Ellis is one of the most energetic and captivating performers in magic. He is a FISM award winner and an incredibly influential magician. Don't miss out on the chance to learn some of his fantastic magic. Featuring live performances and detailed teaching of the entire act! Every move explained in detail.

Sleights explained include: Plus:   LIMITED EDITION - ONLY 1000 COPIES WILL BE SOLD

What People Are Saying:

"All I can say is the Ellis & Webster DVD's are awesome and well worth buying even if you did not find any material on the DVD usefull (which you will find plenty) the comedy style layout and presentation is great! Long live Elly May!!!!!!!"
- Michael Sullivan

"This is an outstanding act."
- Genii Magazine

"When I die, I want to be reincarnated as Tim Ellis."
- Online Visions

"They're not only great on this DVD. They're great for magic."
- About.com

"The best I have ever seen in my life! And I see a lot of magic."
- Cody Fisher

"Buy this DVD. It will be the best investment you can make."
- Inside Magic

"Runaround Sue may well be the most impressive magic routine I've ever seen."
- Mike Whatcott

"I was prepared not to give this a high recommendation since it is only one effect, albeit a FISM routine, but the fact is that this is a genuine teaching video that has lots of bonuses. From a practical point of view, the things discussed are what tables to use, how to store props, and what not to wear. In short, all the little subtleties which are usually only learned through trial and error. The whole routine is dissected so it also becomes a class on creativity that is fascinating."
- Rolando Santos, Linking Ring Magazine

"When I die, I want to be reincarnated as Tim Ellis and for only one reason: so I could get away with what is easily one of the very best versions of the Cups and Balls routine ever crafted. Big claim, but I can back it up. No, correctly, Tim Ellis can back my claim up for me. He has taken what, at its essence, is a two-cup/one-ball Cups and Balls routine with a final load and turned it into a wonderful, entertaining, and theatrical event. This is truly one routine every performer, everyone who makes their bones day in and day out in front of paying audiences, needs to be versed in.

Ellis is a thinker. He thinks and he plays and he colors and he doesn't know about all those lines we're supposed to stay within. He doesn't know we are supposed to end Cups and Balls routines with load after load after load. He doesn't understand that we can't -- simply can't! -- depend on misdirection to make boldness mundane over and over again. He doesn't grasp the concept that subtlety will only get you so far before everything falls apart. He just doesn't get how the world works, for heaven's sake!

That's the real treasure here. Ellis goes so far outside the lines I don't think he could find his way back. I hope he never does, because the results of that travel outside the lines, down paths we seldom think about, is something to see, and digest, and get excited about. The result, in other words, is "Run-around Sue".
- Shane, Online Visions