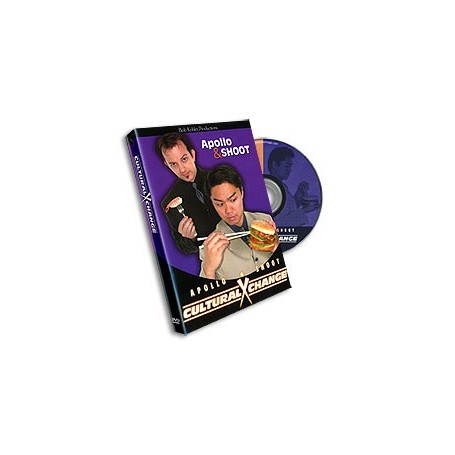 East meets west! The results are absolutely stunning! Shoot and Apollo spend much of their performance time in environments that are just flat out loud. Too loud for clever patter and repartee. Facing this serious problem on a nightly basis drove the
39,95 €

East meets west! The results are absolutely stunning! Shoot and Apollo spend much of their performance time in environments that are just flat out loud. Too loud for clever patter and repartee. Facing this serious problem on a nightly basis drove them to create visual magic that would pop the eyes out of unsuspecting audiences without a single word.Cultural Xchange is a compilation of fourteen of the best items in their repertoire. Each is a totally visually head crusher that the eyes see, but the brain just cannot believe. Shoot Ogawa is the recipient of the prestigious Magic Castle's "Close Up Magician of the Year" for 2002.

Shoot has jumped to the top of the close up world also winning the MacMillian Convention's Close Up contest in November 2002. He was also featured on the cover of Magic Magazine in the March 2003 issue. This amazing young man is fast becoming a superstar of magic.

Apollo Robbins has taken the opposite route. He has been working nonstop in Las Vegas for CEO's and celebrities. He first became a rumor to magicians as the incredible pickpocket at Caesar's Magical Empire. Most of Apollo's incredible material is still shrouded in mystery. This DVD is his first visual release. You will be astounded by his magic, his deep thinking and his performance. This DVD is a Bob Kohler Magic Exclusive. It is only available on this site or if you're lucky enough to see Apollo and Shoot lecture. It is not available anywhere else. The DVD is full featured and will play in any country. Each of the performance pieces on the DVD are accompanied by music...loud, fast music. This is to simulate how their magic appears to spectators in the real world.

You will see that times for professional magicians have changed. You need high impact visual magic that is quick and to the point. All of the fat has been trimmed away. Of course, you could easily add appropriate patter but it's the overwhelming visuals that are the stars of this show.The material is coin magic and card magic. Why? You don't have to burden down your pockets with all sorts of props. Just some cards and some coins. You're loaded for bear! Before this DVD was available, I've personally seen magicians offer Apollo and Shoot the price of the entire DVD to tip Trinity or the Neo-Purse Frame...they are that good.

All of the magic on Cultural Xchange takes cutting edge magic to the next level.If you want to take your magic to a higher plane, I highly recommend you get Cultural Xchange or you will soon be fooled by those who did. This material gets my highest recommendation.