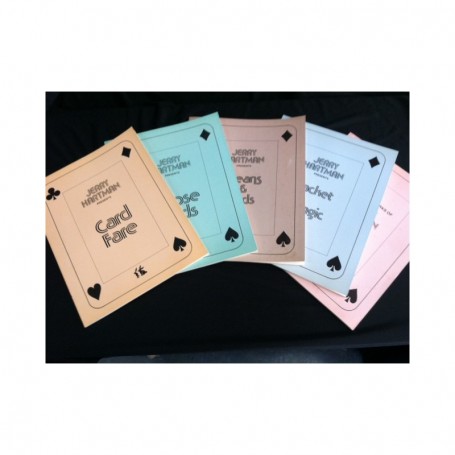 This selection of card routines will baffle any audience and lots of magicians too! Included are winners such as Easy Go, Kingdom 1 & 2 and Imagic to name just a few. Sleights include the Center Lift Switch and Strip Cut Shuffle. 60 pages full of commercial material you will use. Collectors Classic - Limited

Containing many card moves and effects never before published, this unique book will add effective ammuntion to any magician's arsenal of card magic. Sleights include: Underforce, Spread Key Glimpse, Rollover, Rotary Force and Bottom Double Life. Some of the many routines are: Wile Card, Twisterious, To Spell the Truth, Second Blush and Chroma Roamers. 79 pages. Collectors Classic - Limited

If you like doing magic with small packets of playing cards, this book gives you the know how to perform some of the best routines possible. Included are descriptions of all the moves: cuts, switches, lifts, counts, and subleties. Effects include Fourfeathers, Ace-embly, Hotfinger, Four gone Delusion II, Looking Glass Queen and many more! 68 pages. Collectors Classic - Limited

This is a compilation of three different books by Hartman: Super Dupes, Odd Lifts and Secret Subtraction. Contained here is a variety of sleights and effects that will engage the serious card student in hours of pleasure. Super Dupes is a collection of neat card routines using a variety of moves and subtleties. Odd Lifts is a description of several new kinds of double lifts and their applications. Secret Subtraction is a sleight designed to accomplish many intriguing effects. 104 pages Collectors Classic - Limited