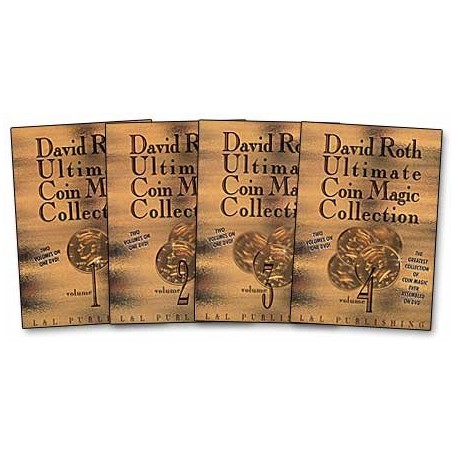 Dai Vernon referred to David Roth as the "greatest coin manipulator in the entire world." On these special double-length videos, David teaches some of the techniques that earned him not only accolades from the Professor but from magicians worldwide.
29,95 €

Dai Vernon referred to David Roth as the "greatest coin manipulator in the entire world." On these special double-length videos, David teaches some of the techniques that earned him not only accolades from the Professor but from magicians worldwide. This is visual, miraculous coin magic taught by one the greatest practitioners the world has ever known. Learn from the best-it's the ultimate!

Volume Three - Classic Showpieces/Live In Sacramento
In this volume, David Roth performs and teaches four of his most famous routines-the magic that he used to forge his reputation-and also, four brand new routines, each as powerful as any of his other magical creations.

The Funnel - How do you pass four half-dollars into a tiny bottle? By using a funnel, of course. Unfortunately, the coins shrink to a minute size in the process. However, all is well when the coins are dumped out of the bottle and return to their normal size. The Planet - A small one-inch globe and four half dollars are shown and, one at a time, the first three coins magically transform into coins from different countries. The fourth coin is initialed by a spectator and nested among the three foreign coins. The four coins vanish and are found (including the marked coin!) inside the globe. The Sleeve - The performer explains how his magic accomplished-with sleeves! An actual empty jacket sleeve is shown and placed on the table. A half-dollar is produced from the sleeve and then vanished, only to reappear in the sleeve. This is repeated until the performer offers another explanation: he uses mirrors. A pocket mirror is then produced from the sleeve. Following a magical sequence where a coin's reflection in the mirror becomes reality, the coins and mirror completely vanish. For the spectacular ending, a giant coin is produced from the sleeve. The Rainbow - A small plastic rainbow is shown and a half-dollar is passed near it. When the performer opens his hand, the silver coin is now blue! A second coin is passed near the rainbow and becomes yellow. A third coin becomes tri-colored. As a finale, a pot of golden coins is magically found, where else but at the end of the rainbow!
Live In Sacramento 1998

The Coins & Silk Routine - A magical interlude where four coins are produced one at a time from a silk handkerchief and just as mysteriously, vanish all at once. To end, the coins are once again produced from the handkerchief. A remarkably clean and thoroughly entertaining routine. The Champagne Glass Concealment - Leave it to David Roth to discover a remarkable secret about champagne glasses that allows you to perform devastating coin magic. Learn the Coins Across routine David uses to illustrate this new principle and you'll have a new, powerful weapon for your coin magic arsenal Purse Frame Wild Coin - Coin magic at its most visual. A purse frame is shown with empty hands and a blank coin is removed from the bag less purse. The blank coin is then magically minted into a copper coin. A second blank coin is removed from the purse frame and is minted into a silver coin while a third is minted into a gold coin. A spectator freely selects one of the coins and holds it in his closed hand. Yet another coin is removed from the purse frame and is magically changed into the spectator's selected coin. The spectator opens his hand to reveal that the coin he was holding has changed into a blank coin! The Rubber Coin - A coin and a small rubber ball go through all sorts of magic adventures including transposing from hand to hand and even passing through the table. For the climax, the ball and the coin fuse together to create an impossible object...a rubber coin!